• In a few months, the NAR is expect to release revisions for their existing home sales and inventory numbers for the last few years. The sales revisions will be down (the NAR has pre-announced this), and the inventory is expected to be revised down too. 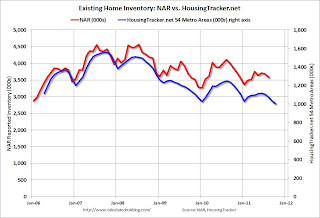 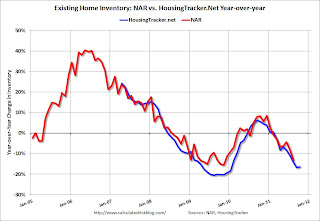 The second graph shows the year-over-year change in inventory for both the NAR and HousingTracker.

HousingTracker reported that the October listings - for the 54 metro areas - declined 16.4% from last year. Inventory was down 16.7% year-over-year in September.

This is just "visible inventory" (inventory listed for sales). There is a large percentage of distressed inventory, and various categories of "shadow inventory" too.