The top story of the week was the Fed’s decision “to extend the average maturity of its holdings of securities”, and “reinvest principal payments from its holdings of agency debt and agency mortgage-backed securities in agency mortgage-backed securities”. These measures are intended to reduce longer term interest rates and probably spur another round of mortgage refinancing. For a discussion of the impact, see Jim Hamilton’s Effects of operation twist

In the U.S., talk of a possible double-dip recession continue to grow, however the data released last week still indicated sluggish growth. Housing starts were off a little in August, but are mostly moving sideways. The Architecture Billings Index was positive for the first time in five months. Existing home sales were up in August, although sales will probably decline in September. And weekly initial unemployment claims are still elevated, but declined slightly.

The NAR reported: August Existing-Home Sales Rise Despite Headwinds, Up Strongly from a Year Ago 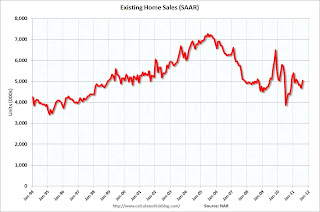 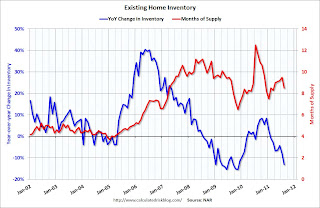 Inventory decreased 13.1% year-over-year in August from August 2010. This is the seventh consecutive month with a YoY decrease in inventory. 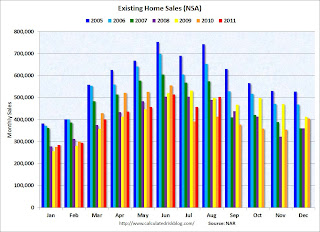 Months of supply decreased to 8.5 months in August, down from 9.5 months in July. This is much higher than normal.

Here is a graph of existing home sales Not Seasonally Adjusted (NSA).

Sales NSA are above last August - of course sales declined sharply last year following the expiration of the tax credit in June 2010 - but sales are also above August 2008 and 2009 (pre-revision). 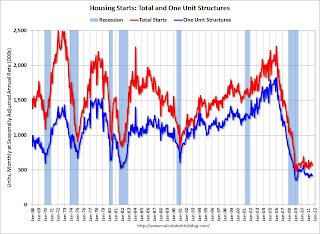 This graph shows total and single unit starts since 1968.

There was a sharp decline in housing starts following the housing bubble, and housing starts have been mostly moving sideways for about two years and a half years - with slight ups and downs due to the home buyer tax credit.

Multi-family starts are increasing in 2011 - although from a very low level. This was below expectations of 592 thousand starts in August, but permits increased in August suggesting a slight increase for starts in September. 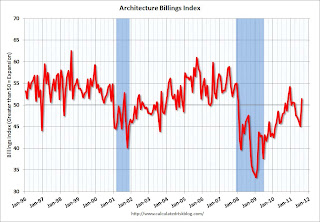 This graph shows the Architecture Billings Index since 1996. The index increased to 51.4 in August from 45.1 in July. Anything above 50 indicates expansion in demand for architects' services.

According to the AIA, there is an "approximate nine to twelve month lag time between architecture billings and construction spending" on non-residential construction. So the recent contraction suggests further declines in CRE investment in early 2012, but possibly flattening out in 9 to 12 months (just one month's data). 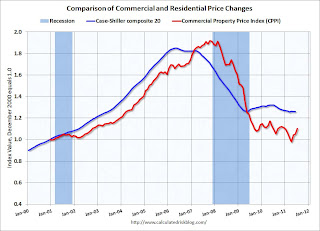 Below is a comparison of the Moodys/REAL Commercial Property Price Index (CPPI) and the Case-Shiller composite 20 index. Beware of the "Real" in the title - this index is not inflation adjusted.

CRE prices only go back to December 2000. The Case-Shiller Composite 20 residential index is in blue (with Dec 2000 set to 1.0 to line up the indexes).

According to Moody's, CRE prices are up 1.2% from a year ago and down about 42% from the peak in 2007. Some of this increase was probably seasonal - also this index is very volatile because there are relatively few transactions. Also, this report was for July, and the index will probably be weaker in August after the debt ceiling debate and the renewed fears about Europe.

The following graph shows the 4-week moving average of weekly claims since January 2000 (there is a longer term graph in graph gallery). 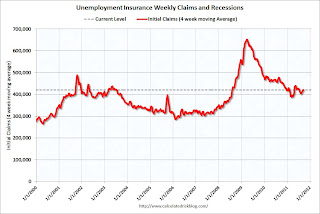 The dashed line on the graph is the current 4-week average. The four-week average of weekly unemployment claims increased this week to 421,000.

The 4-week average has been increasing recently and this is the highest level since early July. 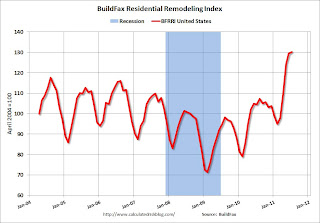 The BuildFax Residential Remodeling Index was at 130.4 in July, up from 129.5 in June. This is based on the number of properties pulling residential construction permits in a given month.

This is the highest level for the index (started in 2004) - even above the levels from 2004 through 2006 during the home equity ("home ATM") withdrawal boom.

Note: Permits are not adjusted by value, so this doesn't mean there is more money being spent, just more permit activity. Also some smaller remodeling projects are done without permits and the index will miss that activity.

Even though new home construction is still moving sideways, it appears that two other components of residential investment will increase in 2011: multi-family construction and home improvement.