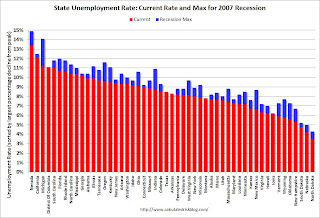 The states are ranked by the highest current unemployment rate.

The fact that 45 states and the District of Columbia have seen little or no improvement over the last year is a reminder that the unemployment crisis is ongoing.
Posted by Calculated Risk on 9/16/2011 11:31:00 AM
Newer Post Older Post Home