The preliminary September Reuters / University of Michigan consumer sentiment index increased slightly to 57.8 from 55.7 in July. 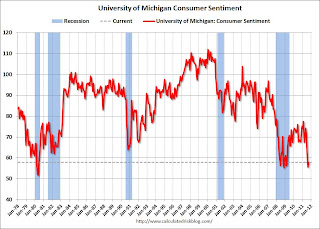 Click on graph for larger image in graphic gallery.

In general consumer sentiment is a coincident indicator and is usually impacted by employment (and the unemployment rate) and gasoline prices. In August, sentiment was probably negatively impacted by the debt ceiling debate.

This was slightly above the consensus forecast of 56.0.