The Refinance Index decreased 6.3 percent from the previous week. The seasonally adjusted Purchase Index increased 0.2 percent from one week earlier.
...
"Heading into the Labor Day weekend, the 30-year rate was at its second lowest level in the history of our survey (the low point was reached last October), and the 15-year rate marked a new low in our survey," said Mike Fratantoni, MBA's Vice President of Research and Economics. "Despite these rates however, refinance application volume fell for the third straight week, and is more than 35 percent below levels at this time last year. Purchase application volume remains relatively flat at extremely low levels, close to lows last seen in 1996."
...
The average contract interest rate for 30-year fixed-rate mortgages decreased to 4.23 percent from 4.32 percent, with points decreasing to 1.04 from 1.29 (including the origination fee) for 80 percent loan-to-value (LTV) ratio loans. This is the second lowest 30-year rate recorded in the survey. 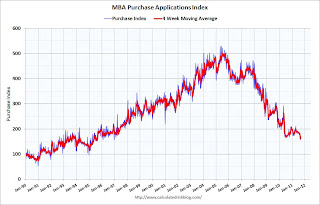 The four week average of the purchase index is now at the lowest levels since August 1995.

This doesn't include the large number of cash buyers ... but purchase application activity was especially weak over the previous month, and this suggests weak home sales in September and October.

Also - with the 10 year treasury yield below 2% this week - mortgage rates will probably be at record lows in the survey next week.
Posted by Calculated Risk on 9/07/2011 07:26:00 AM
Newer Post Older Post Home