Over the last few days, I noted that the FHA and Fannie Mae recently sold a record number of REOs (Real Estate Owned), and that their REO inventories are declining. That is interesting data, but just a small part of the overall distressed property picture.

There are always quite a few "30 day" delinquent loans and it can get a little complicated. As Tanta noted:


30-day delinquencies are very volatile. They are often seasonal, for one thing, and they can very often turn into what underwriters call a "rolling 30" ("rolling" in this case is not to be confused with a "roll rate" of 30 to 60 days delinquent). Imagine a borrower who is current through the June payment, misses the July payment, makes the August payment, and continues on through the end of the year making a payment each month, but never making up that missed payment from July. That borrower would be considered "current" in July (you aren't "delinquent" for our purposes until you're at least 30 days delinquent), 30 days delinquent in August, 30 days delinquent in September, and so on to the end of the year. It doesn't matter how far in time you get from that missed payment: you only missed one, so you are never on any given reporting date more than 30 days down.

You can have "rolling 60s," but servicers are rather less likely to put up with them than rolling 30s.

And on the difference between 90 days and "in-foreclosure":


As a general rule, most servicers do not begin foreclosure proceedings until a loan is 90 days delinquent. This isn't a "magic number," it's just a rule of thumb. For our purposes, one thing it means is that a servicer will usually report separately on loans "90 days delinquent" and "loans in foreclosure." "In foreclosure" means the loan is in a process, often a long one, that starts with the filing of a foreclosure notice and ends at an auction on the courthouse steps.

The foreclosure process starts with the filing of either a "Notice of Default" or a "Lis pendens" depending on the local requirements.

After the foreclosure is completed, the property is "acquired" by the lender and is counted as "Real Estate Owned" (REO) until the lender sells the property. Here is a look at REO inventory: 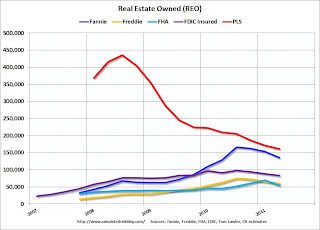 There was a huge surge in REOs for the Private Label Securities (the loans securitized by Wall Street). This was the worst of the worst loans, but the number of REOs held by the PLS has been declining since 2008.

If we just looked at REO inventory, we might think that the situation is getting better pretty quickly. However there are a large number of properties in the "90 days delinquent" and "in foreclosure" buckets. 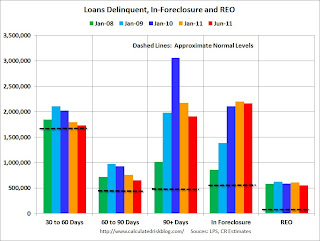 This graph shows the delinquent and REO buckets over time. The delinquency data is from LPS, and the REO estimates are based on work by Tom Lawler and my own calculations.

The dashed lines are "normal" historical levels for each bucket. The 30 day bucket is only slightly elevated (as of June), and the 60 day buckets is somewhat elevated. But the glaring problems are in the 90 day and in-foreclosure buckets.

There are 4.1 million seriously delinquent loans (90 day and in-foreclosure). This is about 3 million more properties than normal. Probably when the mortgage settlement is announced, some of these loans will cure as part of the settlement with principal reduction loan modifications, but many of these properties will become REOs fairly quickly (I've spoken to servicers and they don't know when the dam will break).

So even though REO inventory is declining - and the lenders are selling a record number of REOs - there are still many more to come.