• Notes: This CoreLogic Home Price Index is for July. The Case-Shiller index released yesterday was for June. Case-Shiller is the most followed house price index, but CoreLogic is used by the Federal Reserve and is followed by many analysts. The CoreLogic HPI is a three month weighted average of May, June and July (July weighted the most) and is not seasonally adjusted (NSA).

“While July’s numbers remained relatively positive, particularly for non-distressed sales which have been stable, seasonal influences are expected to fade in late summer. At that point the month-over-month growth will most likely turn negative. The slowdown in economic growth and increased uncertainty caused by the recent stock market volatility will continue to exert downward pressure on prices,” said Mark Fleming, chief economist for CoreLogic. 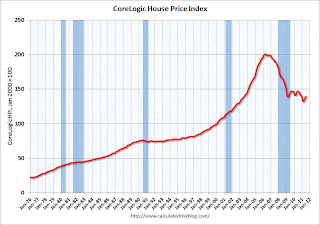 As Mark Fleming noted, some of this increase is seasonal (the CoreLogic index is NSA) and the index is still off 5.2% from last July. Month-to-month prices will probably turn negative later this year (the normal seasonal pattern).