Notes: Case-Shiller is the most followed house price index, but CoreLogic is used by the Federal Reserve and is followed by many analysts. The CoreLogic HPI is a three month weighted average of April, May and June (June weighted the most) and is not seasonally adjusted (NSA).

“While there is a consistent and sustained seasonal improvement in prices over the last three months, prices are lower than a year ago due to the decline in prices after the expiration of the tax credit last year. The difference between the overall HPI and our index excluding distressed sales indicates that the price declines are more concentrated in the distressed sales market,” said Mark Fleming, chief economist for CoreLogic. 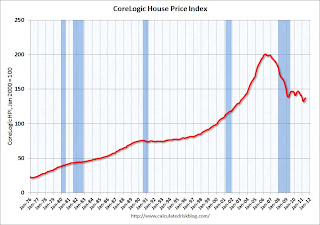 Some of this increase is seasonal (the CoreLogic index is NSA) and the index is still off 6.8% from last June. This is also the eleventh consecutive month showing a year-over-year decline.
Posted by Calculated Risk on 8/03/2011 11:43:00 AM
Newer Post Older Post Home