Here is the weekly update on hotels from HotelNewsNow.com: US hotels post 11.6% weekly RevPAR gain


The U.S. hotel industry recorded an 11.6% revenue-per-available-room gain for the week ending 21 May 2011, according to data from STR. 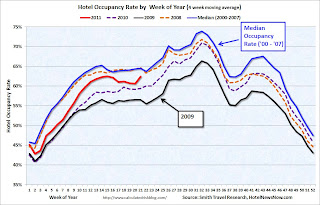