The Department of Transportation (DOT) reported that vehicle miles driven in March were down 1.4% compared to March 2010: 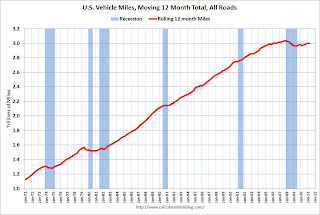 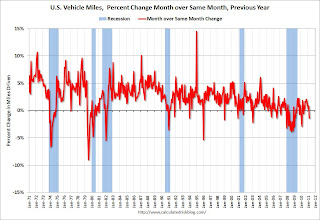 The second graph shows the year-over-year change from the same month in the previous year. So far the current decline is not as a severe as in 2008.

U.S. oil prices in March averaged $103 per barrel, and although prices have declined in May from the April highs, prices have only fallen to just below the prices in March. Also other sources have reported demand for gasoline is down in April and May, so I expect the data for April to show a sharp year-over-year decline in miles driven.
Posted by Calculated Risk on 5/25/2011 05:52:00 PM
Newer Post Older Post Home