The American Trucking Associations’ advance seasonally adjusted (SA) For-Hire Truck Tonnage Index decreased 0.7 percent in April after gaining a revised 1.9 percent in March 2011. March’s increase was slightly better than the 1.7 percent ATA reported on April 26, 2011. The latest drop put the SA index at 114.9 (2000=100) in April, down from the March level of 115.6. 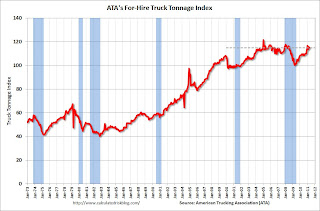 Compared with April 2010, SA tonnage climbed 4.8 percent. In March, the tonnage index was 6.5 percent above a year earlier.

“The drop in April is not a concern. Since freight volumes are so volatile truck tonnage is unlikely to grow every month, even on a seasonally adjusted basis,” ATA Chief Economist Bob Costello said. “I expect economic activity, and with it truck freight levels to grow at a moderate pace in the coming months and quarters.”

“The industry, and the economy at large, should benefit from the recent declines in oil and diesel prices,” Costello added.
...
Trucking serves as a barometer of the U.S. economy, representing 67.2 percent of tonnage carried by all modes of domestic freight transportation ... Motor carriers collected $563.4 billion, or 81.2 percent of total revenue earned by all transport modes.