By request, here is an update to a few graphs including the CoreLogic HPI released this morning (the February report is an average of December, January and February prices). 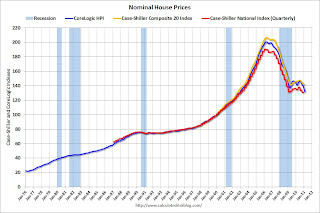 In nominal terms, the National index is back to Q1 2003 levels, the Composite 20 index is slightly above the May 2009 lows, and the CoreLogic index back to January 2003. 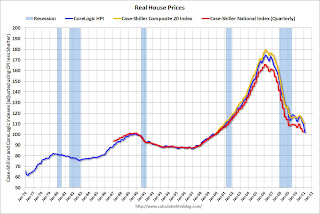 Note: some people use other inflation measures to adjust for real prices. 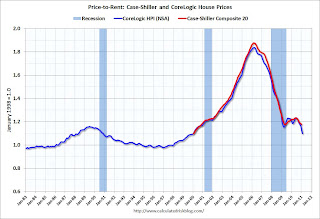 Here is a similar graph through January 2011 using the Case-Shiller Composite 20 and CoreLogic House Price Index.

On a price-to-rent basis, the Composite 20 index is just above the May 2009 levels, and the CoreLogic index is back to January 2000.

I'll have more analysis when the Case-Shiller index is released on April 26th.