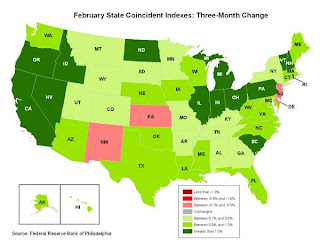 The recovery may be sluggish, but it is fairly widespread geographically.


In the past month, the indexes increased in 44 states, decreased in three (Kansas, New Jersey, and Wyoming), and remained unchanged in three (Delaware, New Mexico, and South Dakota) for a one-month diffusion index of 82. 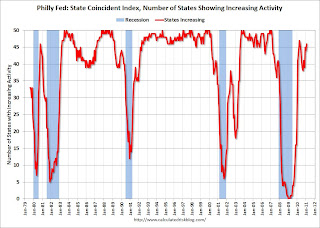 The second graph is of the monthly Philly Fed data for the number of states with one month increasing activity.

The indexes increased in 44 states, decreased in 3, and remained unchanged in 4. Note: this graph includes states with minor increases (the Philly Fed lists as unchanged).

Several states fell back into declining activity in the 2nd of half of last year, but the situation has improved a little in early 2011.

The coincident indexes combine four state-level indicators to summarize current economic conditions in a single statistic. The four state-level variables in each coincident index are nonfarm payroll employment, average hours worked in manufacturing, the unemployment rate, and wage and salary disbursements deflated by the consumer price index (U.S. city average). The trend for each state’s index is set to the trend of its gross domestic product (GDP), so long-term growth in the state’s index matches long-term growth in its GDP.