With the exception of housing, most of the U.S. economic data last week was fairly positive. We were also reminded of several potential downside risks to the U.S. economy, as falling house prices, higher oil prices, the European financial crisis, and state and local government cutbacks, were all in the news.

The focus last week was once again on the Middle East and North Africa, and especially on the historic and tragic events in Libya. These events have pushed U.S. oil prices to around $100 per barrel and have raised questions about the possible drag of higher oil prices on the U.S. economy.

The European financial crisis has been on the back burner, but yields are still elevated and there are key Euro Zone meetings scheduled in March. I expect this to be front page news again soon.

And a downward revision to state and local government spending contributed to the downward revision in the Q4 real GDP growth estimate, revised down to 2.8% from 3.2%. And several state budgets were in the news, especially the Wisconsin political battles.

These are all risks to 2011 economic growth.

But other economic news was more positive. On employment, all of the preliminary indicators suggested an increase in hiring. The four week average of initial weekly unemployment claims fell to the lowest level since 2008. The regional manufacturing surveys all suggest an increase in employment. The Reuters / University of Michigan consumer sentiment index was at the highest level in three years.

Below is a summary of economic data last week mostly in graphs:

• Case-Shiller: National Home Prices Are Close to the 2009Q1 Trough

S&P/Case-Shiller reported that home prices are close to a post-bubble low. 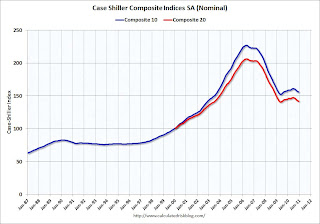 The Composite 20 index is also off 31.2% from the and only 0.8% above the May 2009 post-bubble bottom and will probably be at a new post-bubble low in January.

The next graph shows the price declines from the peak for each city included in S&P/Case-Shiller indices. 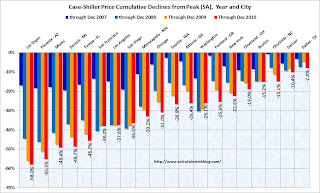 Prices are now falling just about everywhere, and more cities are hitting new post-bubble lows. Both composite indices are still slightly above the post-bubble low, but the indexes will probably be at new lows in early 2011. 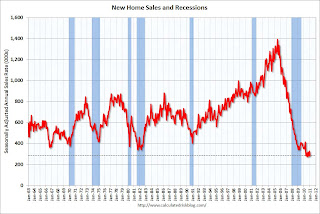 The Census Bureau reports New Home Sales in January were at a seasonally adjusted annual rate (SAAR) of 284 thousand. This is down from a revised 325 thousand in December.

This graph shows New Home Sales vs. recessions since 1963. The dashed line is the current sales rate. New home sales have averaged 293 thousand per month (annual rate) over the last nine months - all below the previous record low. 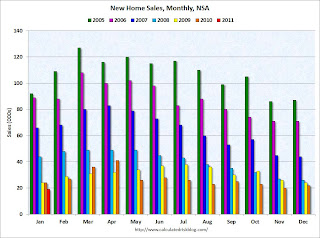 In January 2010 (red column), 19 thousand new homes were sold (NSA). This is a new record low for the month of January. 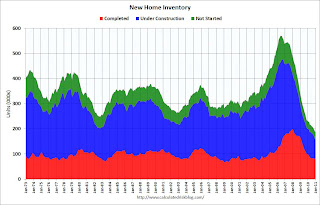 Starting in 1973 the Census Bureau broke down inventory into three categories: Not Started, Under Construction, and Completed.

The inventory of completed homes for sale fell to 78,000 units in January. And the combined total of completed and under construction is at the lowest level since this series started. 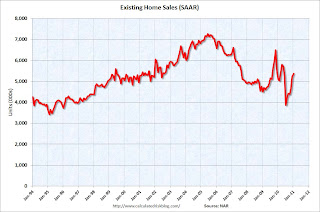 The next graph shows the year-over-year (YoY) change in reported existing home inventory and months-of-supply. Inventory is not seasonally adjusted, so it really helps to look at the YoY change. According to the NAR, inventory decreased to 3.38 million in January from 3.56 million in December. 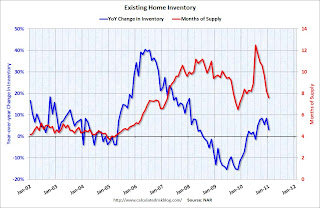 Although inventory decreased from December to January, inventory increased 3.1% YoY in January. This is the sixth consecutive month of year-over-year increases in inventory, although the increase in January was lower than the previous months. But any increase is bad news with the high level of inventory.

Inventory should increase in February and March, and this is something to watch closely over the next few months. 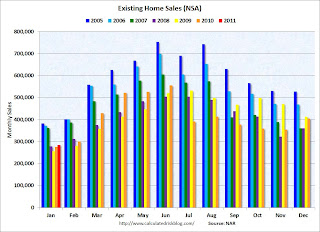 The red column in January is for 2011. Sales NSA were about the same level as the last three years. January is usually the weakest month of the year for existing home sales (followed by February). The real key is what happens in the spring and summer.

The bottom line: Sales increased slightly in January (using the old method to estimate sales), apparently due to an increase in investor purchases of distressed properties at the low end. Inventory remains very high, and the year-over-year increase in inventory is very concerning.

Special Note: Back in January, I noted that it appeared the NAR had overestimated sales by 5% or so in 2007, and that the errors had increased since then (perhaps 10% to 15% or more in 2009 and 2010). The numbers released this week will probably be revised down significantly this summer.

From the American Institute of Architects: Billings at Architecture Firms Hold Steady in January 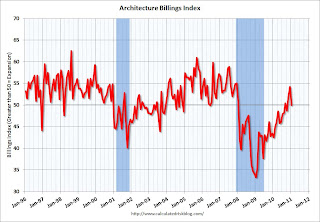 This graph shows the Architecture Billings Index since 1996. The index showed billings were at the same level in January as in December (at 50).

Note: Nonresidential construction includes commercial and industrial facilities like hotels and office buildings, as well as schools, hospitals and other institutions.

According to the AIA, there is an "approximate nine to twelve month lag time between architecture billings and construction spending" on non-residential construction. So this indicator suggests the drag from CRE investment will end mid-year 2011 or so. 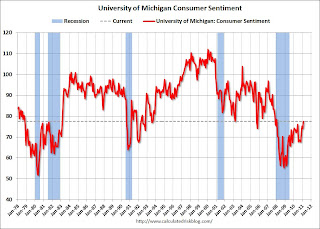 This was above the consensus forecast of 75.4.

In general consumer sentiment is a coincident indicator. This is still fairly low, but improving. 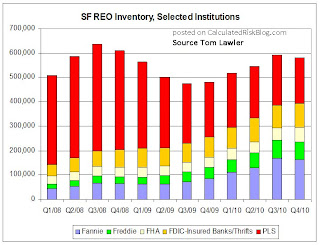 This graph from economist Tom Lawler shows an estimate of all the REO inventory. Lawler writes:


Based on the FDIC’s QBP report, as well as preliminary data on REO for private-label securities (using Barclay’s Capital data, as I don’t have data from my other source yet), REO inventory at “the F’s,” FDIC-insured institutions, and PLS would look as follows [see graph]

From CR: REO inventory is still below the levels in 2008 - but not much - and that was when prices were falling quickly. I think the various lenders are a little more careful disposing of REOs now, but the level of REOs suggest downward house price pressure.