This is a key story: there were a record low number of housing completions in 2010, breaking the record set in 2009.

The total for single family, multi-family and manufactured homes (estimated) was 703 thousand units in 2010. That is about 17% below the 844 units completed in 2009 (including manufactured homes). The previous record low was 1.244 million in 1982.

Note: Multi-family completions will be at a record low this year, but starts will increase. 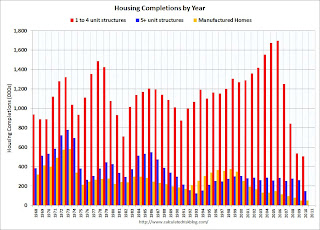 This graph shows annual completions for 1 to 4 units, 5+ units and manufactured homes.

This doesn't include demolitions that were probably in the 200 to 300 thousand unit range. This suggest the excess supply was reduced in 2010, and will probably be significantly reduced in 2011. Of course this also depends on household formation - and that means jobs.