This month has been tough for hotel occupancy with only a small increase over the very low levels for the same period a year ago (includes the holidays). Here is the weekly update on hotels from HotelNewsNow.com: San Francisco tops weekly hotel performance 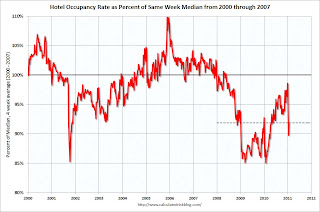 This shows how deep the slump was in 2009 compared to the period following the 2001 recession. This also shows the occupancy rate improvement has slowed sharply over the last month (only about 92% of the median from 2000 to 2007).