And here is the HUD Housing Scorecard. 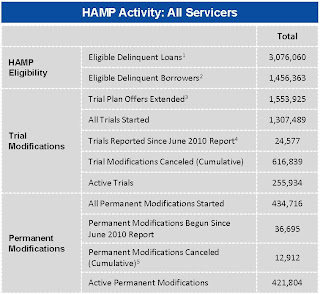 According to HAMP, there are 255,934 "active trials", down from 364,077 last month. There is still a large number of borrowers in limbo since only 165 thousand trials were started over the last 5 months. I expect another large number of cancellations in August. 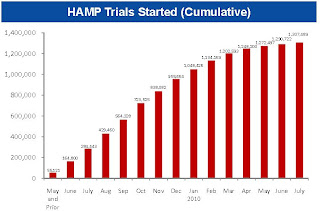 Notice that the pace of new trial modifications has slowed sharply from over 150,000 in September to under 17,00 in July. The program is winding down ...

Think about that for a second: for the median borrower, about 80% of the borrower's income went to servicing debt. And the median is 63.5% after the modification.

These borrowers are still up to their eyeballs in debt after the modification.