IMPORTANT: These graphs are Seasonally Adjusted (SA). S&P has cautioned that the seasonal adjustment is probably being distorted by irregular factors. These distortions could include distressed sales and the various government programs.

S&P/Case-Shiller released the monthly Home Price Indices for June (actually a 3 month average of April, May and June).

This includes prices for 20 individual cities, and two composite indices (10 cities and 20 cities) and the quarterly national index.

From S&P: For the Past Year Home Prices Have Generally Moved Sideways

Data through June 2010, released today by Standard & Poor’s for its S&P/Case-Shiller Home Price Indices, the leading measure of U.S. home prices, show that the U.S. National Home Price Index rose 4.4% in the second quarter of 2010, after having fallen 2.8% in the first quarter. Nationally, home prices are 3.6% above their year-earlier levels. In June, 17 of the 20 MSAs covered by S&P/Case-Shiller Home Price Indices and both monthly composites were up; and the two composites and 15 MSAs showed year-over-year gains. Housing prices have rebounded from crisis lows, but other recent housing indicators point to more ominous signals as tax incentives have ended and foreclosures continue. 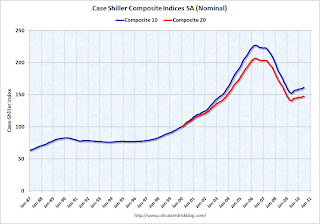 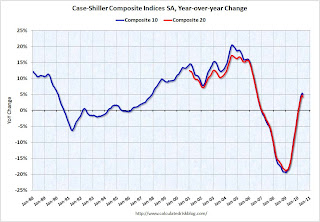 This is the fifth month with YoY price increases in a row. 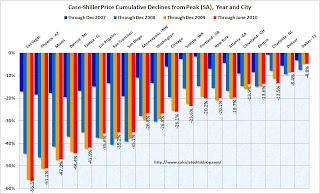 Prices increased (SA) in 9 of the 20 Case-Shiller cities in June seasonally adjusted.

Prices are probably falling right now (starting in July), but this will not show up in the Case-Shiller index for a few months since this an average of three months.
Posted by Calculated Risk on 8/31/2010 09:00:00 AM
Newer Post Older Post Home