There were 3.1 million job openings on the last business day of April 2010, the U.S. Bureau of Labor Statistics reported today. The job openings rate increased over the month to 2.3 percent. The hires rate (3.3 percent) and the separations rate (3.1 percent) were unchanged.

The following graph shows job openings (purple), hires (blue), Total separations (include layoffs, discharges and quits) (red) and Layoff, Discharges and other (yellow) from the JOLTS. 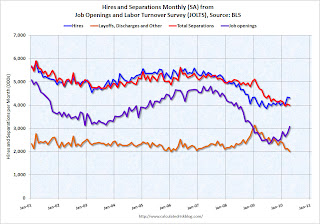 Notice that hires (blue) and separations (red) are pretty close each month. Right now about 4 million people lose their jobs each month, and over 4 million are hired (this is the labor turnover in the economy).

According to the JOLTS report, there were 4.304 million hires in April (SA), and 4.000 million total separations, or 304 thousand net jobs gained. The comparable CES report showed a gain of 290 thousand jobs in April (after revision).

Layoffs and discharges have declined sharply from early 2009 - and are near a series low - and that is a good sign. And the number of job openings increased sharply in April, although the level is still pretty low.

Job openings and "layoffs and discharges" have been improving, but the overall labor turnover is still low.
Posted by Calculated Risk on 6/08/2010 10:00:00 AM
Newer Post Older Post Home