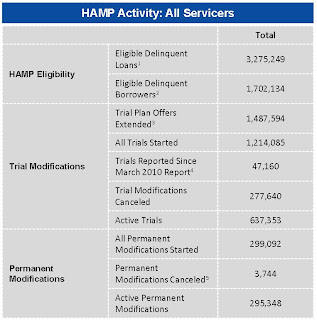 About 299,000 modifications are now "permanent", and 277,000 trial modification cancelled. There is still a huge number of borrowers in limbo. According to HAMP, there are 637,353 "active trials". 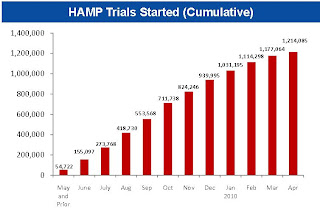 Notice that the pace of new trial modifications has slowed sharply from over 150,000 in September to around 47,160 in April 2010. This is slowest pace since the program started, probably because of two factors: 1) servicers are now pre-qualifying borrowers, and 2) servicers are running out of eligible borrowers. The program is dying ...

On page 6 is some new data. Not surprisingly the servicers who verified income before starting a trial modification have a much higher conversion rate than servicers that allowed borrowers to state their income.

Think about that for a second: over 80% of the borrowers income went to servicing debt. And it is over 64% after the modification. Do they have a life?

Just imagine the characteristics of the borrowers who can't be converted!

In summary: 1) the program is dying, 2) the borrowers DTI characteristics are poor - and getting worse, and 3) there are a large number of borrowers in modification limbo.