The change in private inventories was smaller this quarter - adding 1.7% to GDP in Q1 2010 compared to 4.4% in Q4 2009. It is important to note that the inventory contribution to Q4 GDP was from a slowdown in the liquidation of inventories, but in Q1 businesses were building inventories - and this inventory build will probably slow in Q2.

As I noted earlier, the two leading sectors, residential investment (RI) and personal consumption expenditures (PCE), were mixed. RI declined to a new record low as percent of GDP, however PCE increased at a 3.6% real annualized rate. 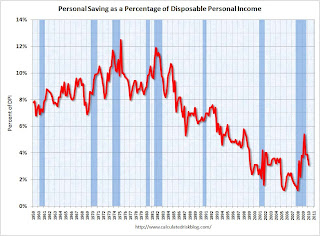 This graph shows personal saving as a percent of disposable personal income.

It is not unusual for the saving rate to decline at the beginning of a recovery as people become more confident. This helps drive consumer spending, but with the high levels of household debt, I expect the saving rate to increase over the rest of the year.

Here are some Q1 numbers (all annualized):