Nearing Retirement and Unemployed or Underemployed

One of the groups seriously impacted by the great recession is the "pre retirement" generation - currently the "Baby Boomers" - the workers between the ages of 45 and 64. 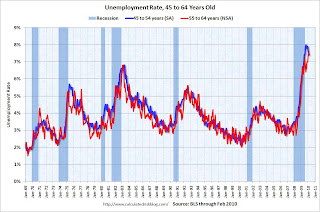 This graph shows the unemployment rates for two groups: 45 to 54 (seasonally adjusted), and 55 to 64 (only NSA data is available).

The unemployment rate for these age groups hit an all time high during the great recession (highest since WWII).

Michael Winerip at the NY Times has a story about the plight of several "Boomers" who he has tracked for the last year: Time, It Turns Out, Isn’t on Their Side (ht Ann)

A YEAR ago, I wrote about a job fair at the Sheraton in Midtown Manhattan, where over 5,000 mainly white collar, middle-aged jobless men and women waited in the cold for more than two hours, hoping to find work. ...

For that column, I interviewed two dozen boomers. Given recent reports from the federal government and Manpower, the employment agency, that the hiring outlook is beginning to improve, I thought it would be worthwhile to go back to those highly motivated people. ...

The short answer is, of the 16 I interviewed again, 9 describe themselves as still struggling. Eight continue to be unemployed or are working part-time jobs that pay near minimum wage. Several were so concerned about bias, they did not want to give their ages. ...

Of the 16, only one, Mr. Kramer, who was unemployed eight months before being hired in July as a closing manager at a Best Yet supermarket, has found a job that pays more than his old position. More typical of the seven who’ve found full-time work is Ben Brief, 60, a printing supervisor, who’d been jobless two months when I interviewed him on Sixth Avenue in the 20-degree weather. Mr. Brief was out of work nine more months, before finding a printing job that paid 20 percent less than his previous position. “I’m glad to be working, but people know they can pay you a lot less in this economy,” he said.