In the earlier Weekly Summary and a Look Ahead post, I forgot to mention that U.S. vehicle sales will be released on Thursday.

Edmunds.com analysts predict that March's Seasonally Adjusted Annualized Rate (SAAR) will be 12.4 million, up from 10.3 million in February 2010.

“Although this SAAR sounds promising, it’s too early to wave the flag and say that the economy has turned the corner,” Edmunds.com CEO Jeremy Anwyl told AutoObserver.com. “Incentives drove sales this month, but those were defensive moves in response to Toyota stepping up incentives and are unlikely to last because inventories are simply not high enough to justify them in the long term.” 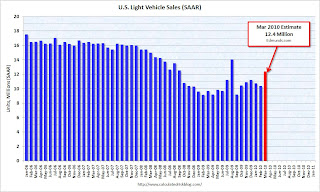 This graph shows the historical light vehicle sales (seasonally adjusted annual rate) from the BEA (blue) and a forecast for March from Edmunds.com.

Excluding the cash-for-clunkers month of August 2009, Edmunds is forecasting the highest sales rate since Sept 2008.

As Edmunds notes, the expected jump in March sales was driven by Toyota's incentive program to regain market share - and the response of the other manufacturers. As always I'll be posting the sales reports and an estimate of the SAAR around 4 PM ET on Thursday.
Posted by Calculated Risk on 3/28/2010 08:24:00 PM
Newer Post Older Post Home