Impact of Census on Employment and Unemployment Rate

What will be the impact of the 2010 Census on employment? 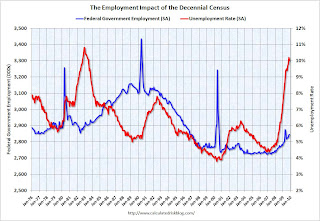 The first graph shows the impact of the decennial Census on Federal Government employment (Seasonally adjusted) and on the unemployment rate.

Every 10 years there is a large spike in Federal Government employment, but the Census has little impact on the unemployment rate. 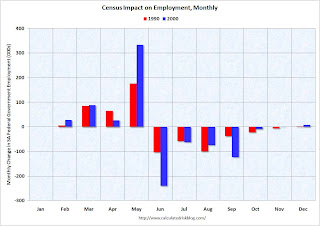 The second graph shows the monthly change in Federal government employment during the last two decennial census periods (1990 and 2000).

There was a surge in payroll employment in March, April and especially in May. And then almost all of the jobs were lost in the June through September period. We should expect a similar pattern this year.

Note: there are reports that the Census Bureau will hire up to 1.4 million people, however that represents some contingency planning, and includes a number of people already hired temporarily in 2009. We can probably expect a couple hundred thousand people added between January through April, and another 500 thousand or so in May. This could push the unemployment rate down slightly, but probably in the 0.1% to 0.2% range. 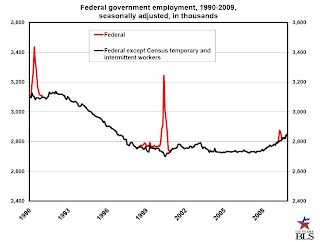 The BLS provides a monthly report of Census hiring. This graph is from the BLS report and shows the historical impact of the Census on Federal Government employment.

There was a small spike in employment in April 2009, and currently the decennial census has little impact on employment. This will be something to check every month - especially from March through September.