Although this is being reported as "soars" and above expectations, sentiment is still low - at recesssion levels - and this is just a rebound to the September level. 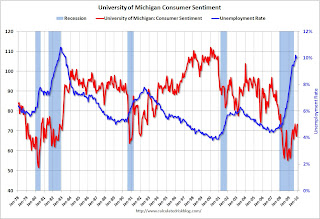 Consumer sentiment is a coincident indicator - it tells you what you pretty much already know.

This graph shows consumer sentiment and the unemployment rate. There are other factors impacting sentiment too - like gasoline prices - but it is no surprise that consumer sentiment is still very low.
Posted by Calculated Risk on 12/11/2009 10:01:00 AM
Newer Post Older Post Home