On a monthly basis, retail sales increased 1.3% from October to November (seasonally adjusted), and sales are up 1.9% from November 2008. 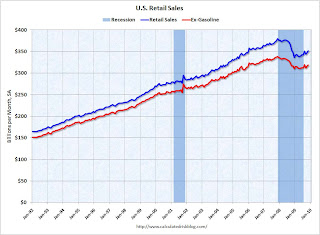 This graph shows retail sales since 1992. This is monthly retail sales, seasonally adjusted (total and ex-gasoline).

This shows that retail sales fell off a cliff in late 2008, and appear to have bottomed, but at a much lower level.

The red line shows retail sales ex-gasoline and shows there has been only a little increase in final demand. 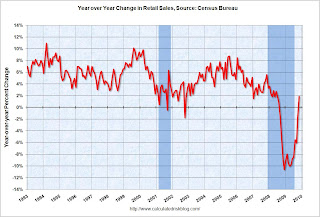 The second graph shows the year-over-year change in retail sales since 1993.

Retail sales increased by 1.9% on a YoY basis. The year-over-year comparisons are much easier now since retail sales collapsed in October 2008. Retail sales bottomed in December 2008.

It appears retail sales have bottomed, and there might be a little pickup in final demand.
Posted by Calculated Risk on 12/11/2009 08:30:00 AM
Newer Post Older Post Home