The NAR reports: Another Big Gain in Existing-Home Sales as Buyers Respond to Tax Credit

Existing-home sales – including single-family, townhomes, condominiums and co-ops – rose 7.4 percent to a seasonally adjusted annual rate of 6.54 million units in November from 6.09 million in October, and are 44.1 percent higher than the 4.54 million-unit pace in November 2008. Current sales remain at the highest level since February 2007 when they hit 6.55 million.
...
Total housing inventory at the end of November declined 1.3 percent to 3.52 million existing homes available for sale, which represents a 6.5-month supply at the current sales pace, down from an 7.0-month supply in October. 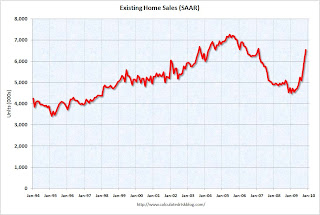 Of course many of the transactions in November were due to first-time homebuyers rushing to beat the initial expiration of the tax credit (that has now been extended). This has pushed sales far above the historical normal level; based on normal turnover, existing home sales would be in the 4.5 to 5.0 million SAAR range. 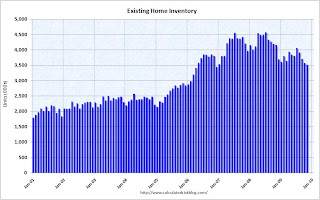 The second graph shows nationwide inventory for existing homes. According to the NAR, inventory decreased to 3.52 million in November from 3.57 million in October. The all time record was 4.57 million homes for sale in July 2008. This is not seasonally adjusted.

Typically inventory peaks in July or August, so this decline is mostly seasonal. 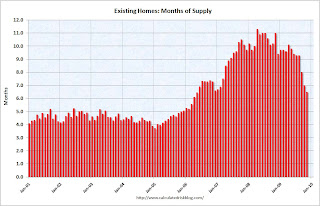 Months of supply declined to 6.5 months in November.

A normal market has under 6 months of supply, so this is still high - and especially considering sales were artificially boosted by the tax credit. I'll have more soon ...
Posted by Calculated Risk on 12/22/2009 10:00:00 AM
Newer Post Older Post Home