So much data, so little time ... just catching up. This was released earlier today:

Here is a map of the three month change in the Philly Fed state coincident indicators. Thirty seven states are showing declining three month activity. The index increased in 12 states, and was unchanged in 1. 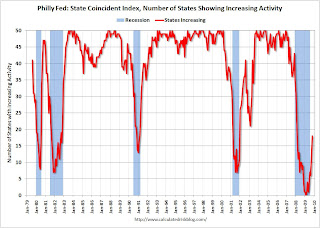 The second graph is of the monthly Philly Fed data of the number of states with one month increasing activity. Most of the U.S. was has been in recession since December 2007 based on this indicator.

Although the number of states in recession has been declining, a majority of states still showed declining activity in October.
Posted by Calculated Risk on 11/24/2009 06:59:00 PM
Newer Post Older Post Home