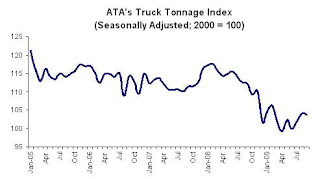 Click on graph for slightly larger image in new window.

Compared with October 2008, SA tonnage fell 5.2 percent, which was the best year-over-year showing since November 2008. In September, the index was down 7.3 percent from a year earlier.

ATA Chief Economist Bob Costello said that the latest reading reflects an economic recovery that is still trying to gain balance, although it is on more solid ground than a year ago. “Repeating what I said last month, the trucking industry should not be alarmed by the small decreases in September and October,” Costello noted. “The economy is behaving as expected, with starts and stops. This is being reflected in truck tonnage, as well as most economic indicators.” He reiterated that the industry should remain prepared for ups and downs in the months ahead, but the general trend should be modest improvement. “Since consumer spending and manufacturing are not surging, trucking shouldn’t expect robust growth either. However, both retail sales and manufacturing output are exhibiting mild upward trend lines, which is the path I expect truck freight to take.”
...
Trucking serves as a barometer of the U.S. economy, representing nearly 69 percent of tonnage carried by all modes of domestic freight transportation, including manufactured and retail goods.

The economy fell off a cliff in September 2008, so the year-over-year comparisons are getting easier. And just like with other indicators, trucking appears to have recovered slightly from the bottom - and is now moving mostly sideways - and will likely remain stalled until there is pickup in domestic end demand.
Posted by Calculated Risk on 11/24/2009 09:37:00 PM
Newer Post Older Post Home