Earlier this year some economists were highlighting the risk that the low level of economic activity could push the rate of inflation down, perhaps even below zero. I think the risk of a substantial further reduction in inflation has diminished substantially since then. The historical record suggests that the early years of a recovery is when the risk is greatest that confidence in the stability of inflation erodes and we see an upward drift in inflation and inflation expectations. This risk could be particularly pertinent to the current recovery, given the massive and unprecedented expansion in bank reserves that has occurred, and the widespread market commentary expressing uncertainty over whether the Federal Reserve is willing and able to promptly reverse that expansion.

As a technical matter, I do not see any problem – we do have the tools to remove as much monetary stimulus as necessary to keep inflation low and stable. The harder problem is the same one that we face after every recession, which is choosing when and how rapidly to remove monetary stimulus. There is no doubt that we must be aware of the danger of aborting a weak, uneven recovery if we tighten too soon. But if we hope to keep inflation in check, we cannot be paralyzed by patches of lingering weakness, which could persist well into the recovery. In assessing when we will need to begin taking monetary stimulus out, I will be looking for the time at which economic growth is strong enough and well-enough established, even if it is not yet especially vigorous.

Lacker is one of the inflation hawks on the FOMC.

Second, I think Q3 GDP will be revised down based on subsequent data (like the trade report), and GDP growth will be lower than Lacker expects in early 2010. I think Lacker is overly optimistic on the economy.

Also - historically the Fed hasn't raised rates until well after unemployment peaks, and I doubt they will raise rates until late in 2010 at the earliest (and probably later). Here is a graph from a previous post in September (the unemployment rate is now 10.2%): 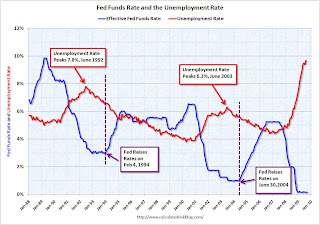