The Fed and Mortgage Rates

Meredith Whitney expressed concern about what will happen when the Fed stops buying GSE MBS by the end of the first quarter 2010. From Bloomberg: Meredith Whitney Says Bank Stocks Are ‘Grossly’ Overvalued

The Federal Reserve has begun slowing purchases in the $5 trillion market for so-called agency mortgage-backed securities after announcing in September that it would extend the timeline for its $1.25 trillion program to March 31 from year-end. Whitney said that banks are only originating home loans that they can sell to Fannie Mae and Freddie Mac.

“If Fannie and Freddie can’t sell to an end buyer, i.e. the U.S. government steps back, the mortgage market at minimum contracts, rates go higher, and banks are poised with more writedowns,” said Whitney, founder of Meredith Whitney Advisory Group. “This is probably the issue that scares me most across the board.”

This raises an interesting question: What is the impact from Fed MBS buying on mortgage rates? I looked at this a couple of months ago: The Impact on Mortgage Rates of the Fed buying MBS and here is an update:

Freddie Mac (NYSE:FRE) today released the results of its Primary Mortgage Market Survey® (PMMS®) in which the 30-year fixed-rate mortgage (FRM) averaged 4.83 percent with an average 0.7 point for the week ending November 19, 2009, down from last week when it averaged 4.91 percent. Last year at this time, the 30-year FRM averaged 6.04 percent.

This suggests morgage rates are about 50 bps below the expect level ... 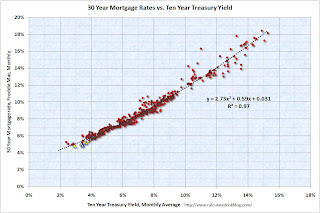 Here is an update to the previous graph. Sure enough mortgage rates have been below expectations for about seven months (recent months in yellow with blue outline at lower left).

Although this is a limited amount of data - and the yellow triangles are within the normal spread - this suggests the Fed's buying of MBS is reducing mortgage rates by about 35 to 50 bps relative to the Ten Year treasury.

It isn't that Fannie and Freddie "can’t sell to an end buyer", it is that the GSEs will be selling for a lower price (higher yield) when the Fed completes the MBS purchase program. At that time mortgage rates will probably rise by about 35 bps to 50 bps (relative to the Ten Year) in order to attract other buyers. Alone that isn't all that "scary".

But combined with the growing problems at the FHA, the distortions in the housing market caused by the first-time home buyer tax credit, rising delinquencies, the uncertainty of the modification programs, and likely further house price declines in many bubble states - there are serious problems ahead for the housing market.
Posted by Calculated Risk on 11/21/2009 03:20:00 PM
Newer Post Older Post Home