Note: Last year Labor Day was a week earlier (Sept 1st in 2008, Sept 7th this year) and that made the comparison last week more difficult, and the comparison easier this week.

With the Labor Day holiday weekend falling a week later than 2008, the year-over-year comparisons for the week ending 5 September 2009 were not as harsh as usual,according to Smith Travel Research. 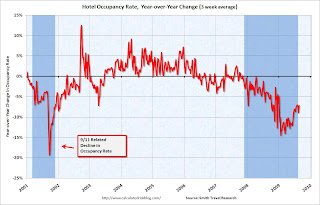 This graph shows the YoY change in the occupancy rate (3 week trailing average).

Earlier this year business travel was off much more than leisure travel. So it was expected that the summer months would not be as weak as earlier in the year. The next few weeks will be the real test for business travel, and for the hotel industry.