The 119,874 consumer bankruptcy filings in August represented a 24 percent increase over last year’s monthly total, according to the American Bankruptcy Institute (ABI), relying on data from the National Bankruptcy Research Center (NBKRC). Although an increase over the previous year, the August 2009 consumer filings represented a 5 percent decrease from the July 2009 total of 126,434. Chapter 13 filings constituted 28.3 percent of all consumer cases in August, unchanged from the July rate.

"Consumers are continuing to turn to bankruptcy as a shield from the sustained financial pressures of today’s economy," said ABI Executive Director Samuel J. Gerdano. "As a result, we expect consumer filings to top 1.4 million this year."

Note that there is some month to month variability, so the decline from July is probably noise. 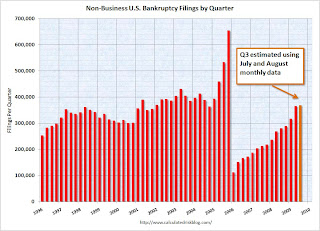 This graph shows the non-business bankruptcy filings by quarter.

Note: Quarterly data from Administrative Office of the U.S. Courts, Q3 2009 based on monthly data from the American Bankruptcy Institute.

The quarterly rate is close to the levels prior to when the Bankruptcy Abuse Prevention and Consumer Protection Act of 2005 (BAPCPA) took effect. There were over 2 million bankruptcies filed in Calendar 2005 ahead of the law change.

There have been 928 thousand personal bankrutpcy filings through Aug 2009, and the American Bankruptcy Institute is predicting over 1.4 million new bankruptcies by year end - I'll take the over!
Posted by Calculated Risk on 9/02/2009 11:46:00 AM
Newer Post Older Post Home