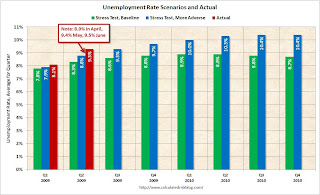 This graph shows the unemployment rate compared to the stress test economic scenarios on a quarterly basis as provided by the regulators to the banks (no link).

This is a quarterly forecast: the Unemployment Rate in Q2 was higher than the "more adverse" scenario.

Note also that the unemployment rate has already exceeded the peak of the "baseline scenario". 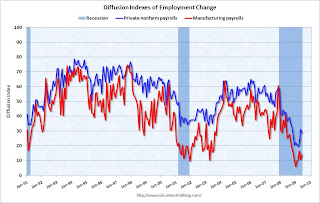 The BLS diffusion index is a measure of how widespread changes in employment are. Some people think it measures the percent of industries increasing employment, but that isn't quite correct.

From the BLS handbook:

The manufacturing diffusion index fell even further, from 40 in May 2008 to just 6 in January 2009. The manufacturing index is still very low in June (13.9) indicating widespread job losses. 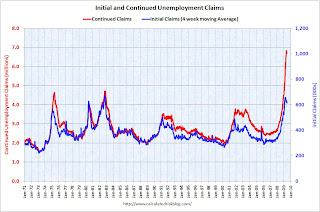 This graph shows weekly claims and continued claims since 1971.

Continued claims decreased to 6.70 million. This is 5.0% of covered employment.

The four-week average of weekly unemployment claims decreased this week, and is now 43,500 below the peak of 12 weeks ago. There is a reasonable chance that claims have peaked for this cycle.

However the level of initial claims (over 614 thousand) is still very high, indicating significant weakness in the job market.
Posted by Calculated Risk on 7/02/2009 09:25:00 AM
Newer Post Older Post Home