From Reuters: U.S. architecture billings index down in June - AIA

... The Architecture Billings Index fell more than 5 points last month to a reading of 37.7, after a slight increase in the prior month, according to the American Institute of Architects.

The index has remained below 50, indicating contraction in demand for design services, since January 2008. ...

"It appears as though we may have not yet reached the bottom of this construction downturn," AIA Chief Economist Kermit Baker said. "Architecture firms are struggling and concerned that construction market conditions will not even improve ... next year."
...
Nonresidential construction includes commercial and industrial facilities like hotels and office buildings, as well as schools, hospitals and other institutions. The AIA's Billings Index, which began in 1995, is considered a measure of construction spending nine to 12 months in the future.
emphasis added 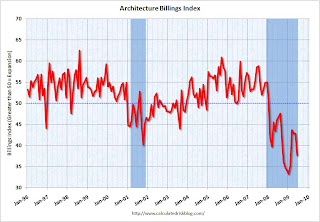 This graph shows the Architecture Billings Index since 1996. The index is still below 50 indicating falling demand.

Historically there is an "approximate nine to twelve month lag time between architecture billings and construction spending" on commercial real estate (CRE). This suggests further dramatic declines in CRE investment later this year and next.

Earlier this month, the AIA lowered their forecast for commercial construction, from Bloomberg: U.S. Commercial Construction to Drop 16% This Year, Report Says