Nonfarm payroll employment continued to decline in April (-539,000), and the unemployment rate rose from 8.5 to 8.9 percent, the Bureau of Labor Statistics of the U.S. Department of Labor reported today. Since the recession began in December 2007, 5.7 million jobs have been lost. In April, job losses were large and widespread across nearly all major private-sector industries. Overall, private sector employment fell by 611,000. 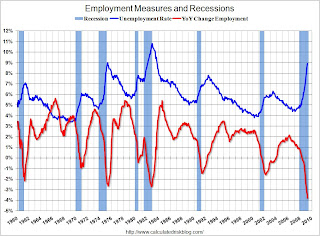 Nonfarm payrolls decreased by 539,000 in April. March job losses were revised to
699,000. The economy has lost almost 4 million jobs over the last 6 months, and over 5.7 million jobs during the 16 consecutive months of job losses.

The unemployment rate rose to 8.9 percent; the highest level since 1983.

Year over year employment is strongly negative (there were 5.2 million fewer Americans employed in Apr 2009 than in Apr 2008). 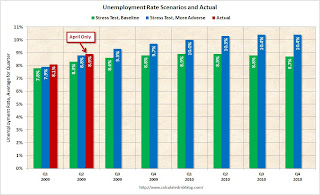 The second graph shows the unemployment rate compared to the stress test economic scenarios on a quarterly basis as provided by the regulators to the banks (no link).

Note also that the unemployment rate has already reached the peak of the "baseline scenario".