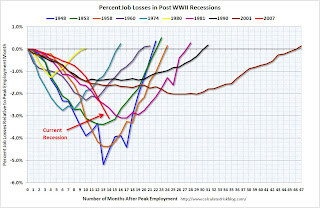 This graph shows the job losses from the start of the employment recession, in percentage terms (as opposed to the number of jobs lost).

For the current recession, employment peaked in December 2007, and this recession was a slow starter (in terms of employment and declines in GDP).

Howver job losses have really picked up in recent months (red line cliff diving on the graph), and the current recession is now the worst recession in percentage terms since the 1950s - although not in terms of the unemployment rate.

In the early post-war recessions (1948, 1953, 1958), there were huge swings in manufacturing employment and that lead to larger percentage losses. For the current recession, the job losses are more widespread. 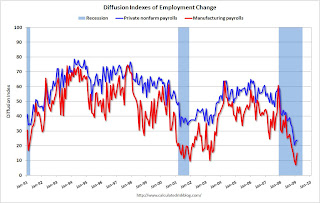 A diffusion index is a measure of the dispersion of change. This gives a feel for how widespread job gains and losses are across industries. The closer to 50, the more narrow the changes in employment.

************************
UPDATE: The BLS diffusion index is a measure of how widespread changes in employment are. Some people think it measures the percent of industries increasing employment, but that isn't quite correct. From the BLS handbook:

So it is possible for the diffusion index to increase (like manufacturing increased from 7.2 to 15.1) not because industries are hiring, but because fewer industries are losing jobs.

If there is a sliver of good news in this employment report, it is that the diffusion indices have inched up a little.
Posted by Calculated Risk on 3/06/2009 09:43:00 AM
Newer Post Older Post Home