Nonfarm payroll employment continued to fall sharply in February (-651,000), and the unemployment rate rose from 7.6 to 8.1 percent, the Bureau of Labor Statistics of the U.S. Department of Labor reported today. Payroll employment has declined by 2.6 million in the past 4 months. In February, job losses were large and widespread across nearly all major industry sectors. 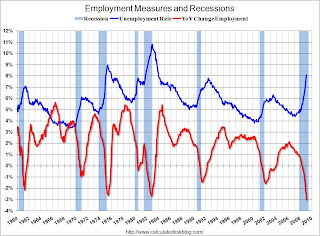 Nonfarm payrolls decreased by 651,000 in February. The economy has lost almost 2.6 million jobs over the last 4 months!

The unemployment rate rose to 8.1 percent; the highest level since June 1983.

Year over year employment is strongly negative (there were 4.2 million fewer Americans employed in Feb 2009 than in Feb 2008). This is another extremely weak employment report ...
Posted by Calculated Risk on 3/06/2009 08:54:00 AM
Newer Post Older Post Home