Something a little different ... 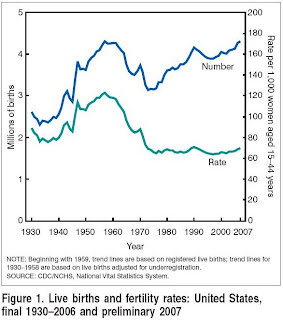 From the CDC: Births: Preliminary Data for 2007

The preliminary estimate of births in 2007 rose 1 percent to 4,317,119, the highest number of births ever registered for the United States. The general fertility rate increased by 1 percent in 2007, to 69.5 births per 1,000 women aged 15–44 years, the highest level since 1990. Increases occurred within all race and Hispanic origin groups and for nearly all age groups.
...
This number surpasses the peak of the postwar ‘‘baby boom,’’ in 1957 ...

The preliminary estimate of the total fertility rate (TFR) in 2007 was 2,122.5 births per 1,000 women, a 1 percent increase compared with the rate in 2006 (2,100.5, see Table 1). The TFR summarizes the potential impact of current fertility patterns on completed family size by estimating the average number of births that a hypothetical group of 1,000 women would have over their lifetimes, based on age-specific birth rates observed in the given year.

The U.S. TFR in 2007 marks the second consecutive year in which the rate has been above replacement. A replacement rate is the rate at which a given generation can exactly replace itself, generally considered to be 2,100 births per 1,000 women. The TFR had been below replacement from 1972 through 2005.

Although the chart only goes back to 1930, both the number of births, and the birth rate, declined precipitously in the late '20s as more and more families put off having children because of hard economic times (Times were tough for many families even before the stock market crash of 1929).

The original baby bust last throughout the '30s.

There is no evidence in this 2007 data of families putting off having children now. In fact the birth rate and total fertility rate were increasing in 2007.