Four banks were closed by the FDIC Friday, for a total of 13 banks so far in 2009. To put those failures into perspective, here are two graphs: the first shows the number of bank failures by year since the FDIC was founded, and the second graph shows the size of the assets and deposits (in current dollars). 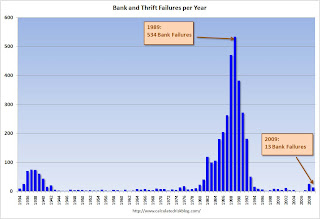 Back in the '80s, there was some minor multiple counting ... as an example, when First City of Texas failed on Oct 30, 1992 there were 18 different banks closed by the FDIC. This multiple counting was minor, and there were far more bank failures in the late '80s and early '90s than this year. 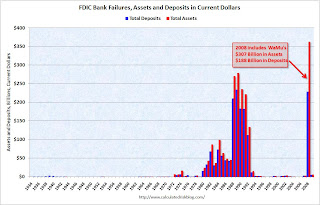 The second graph (ht Kurt) shows the bank failures by total assets and deposits per year starting in 1934 (in current dollars adjusted with CPI).

WaMu accounted for a vast majority of the assets and deposits of failed banks in 2008, and it is important to remember that WaMu was closed by the FDIC, and sold to JPMorgan Chase Bank, at no cost to the Deposit Insurance Fund (DIF).

There are many more bank failures to come over the next couple of years, mostly because of losses related to Construction & Development (C&D) and Commercial Real Estate (CRE) loans, but so far, especially excluding WaMu, the total assets and deposits of failed FDIC insured banks is much smaller than in the '80s and early '90s.