“President Obama — backed by the conclusions of a broad range of economists — believes that China is manipulating its currency.”
Treasury Secretary nominee Tim Geithner, Jan 22, 2009

I'm just thinking about some trades issues, and here a few graphs that might be helpful: 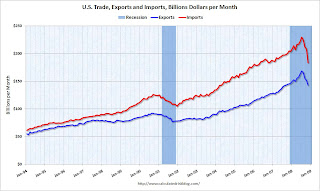 The first graph shows the monthly U.S. exports and imports in dollars through November 2008 (most recent data). The recent rapid decline in foreign trade is clear. Note that a large portion of the decline in imports is related to the fall in oil prices. 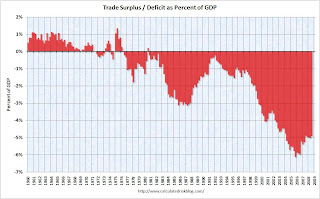 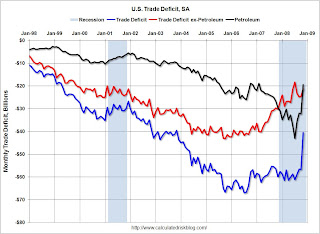 The third graph shows the U.S. trade deficit, both with and without petroleum through November.

So, excluding petroleum, the trade deficit has been falling since early 2006. 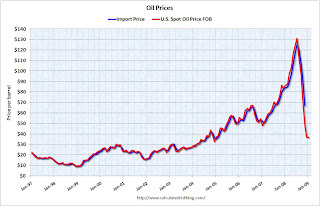 Obviously the two price series track very well. This implies that import oil prices will drop sharply in the December and January reports, from $67 per barrel in November to around $37 per barrel in January.

Based on this decline in oil prices, and looking back at the third graph, the oil deficit will probably fall from around $19 billion in November to close to $10 billion in January (the actual decline depends on volumes in addition to price). All else being equal, this would push the trade deficit down to $30 billion in January.