The rebalancing of the U.S. economy is ongoing. The savings rate is rising, consumption is falling, and the trade deficit is declining ... 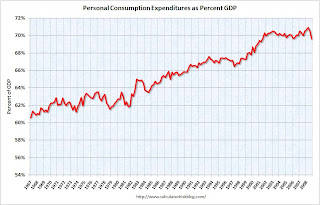 The first graph shows Personal Consumption Expenditures (PCE) as a percent of GDP. Note: the graph doesn't start at zero to better show the change.

Some analysts think the U.S. will return to the days of Ozzie and Harriet with PCE as a percent of GDP in the low 60s, but I think a decline to around 68% is more likely. 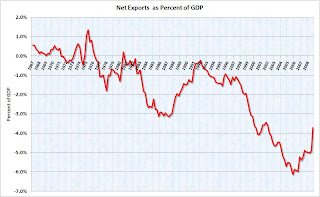 Net exports as a percent of GDP has declined sharply to 3.7% of GDP. This is the smallest deficit since the end of the '01 recession.

As we all know, I (investment) is declining and some components of investment (like non-residential investment in structures) will decline sharply in 2009. G (government) will increase with the Obama stimulus package, and the goal is to increase G until Investment bottoms out. We will see, but the rebalancing of the U.S. economy that we discussed several years ago is now happening.