From the Philadelphia Fed:

The Federal Reserve Bank of Philadelphia produces a monthly coincident index for each of the 50 states. The indexes are released a few days after the Bureau of Labor Statistics (BLS) releases the employment data for the states.

Here is the release for December:

The Federal Reserve Bank of Philadelphia has released the coincident indexes for each of the 50 states for December 2007. The indexes increased in 20 states for the month, decreased in 23, and were unchanged in seven. 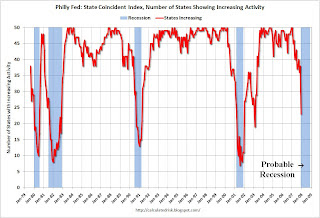 This is a graph of the monthly Philly Fed data of the number of states with increasing activity.

I've added the current probably recession. At least half of the U.S. was in recession in December based on this indicator (and probably the entire U.S. economy).

Note: the Philly Fed calls some states unchanged with minor changes. The press release says 20 there were states with increasing activity, but including small changes, there were 23 (as graphed). 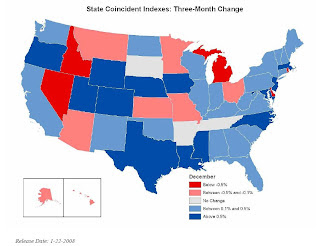 This map is from the Philly Fed report for December, and shows the Three Month change for all 50 states. If the economy is in recession, this map should turn very red over the next few months.
Posted by Calculated Risk on 1/23/2008 05:10:00 PM
Newer Post Older Post Home