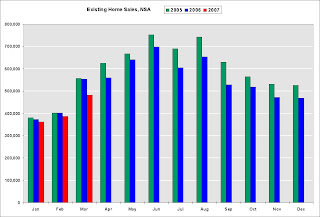 ... total existing-home sales – including single-family, townhomes, condominiums and co-ops – fell 8.4 percent to a seasonally adjusted annual rate1 of 6.12 million units in March from a pace of 6.68 million in February, and are 11.3 percent below the 6.90 million-unit level in March 2006. 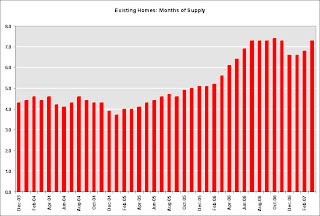 The second graph shows the months of supply.

Total housing inventory levels fell 1.6 percent at the end of March to 3.75 million existing homes available for sale, which represents a 7.3-month supply at the current sales pace, up from a 6.8-month supply in February. 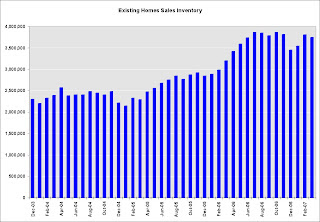 Update2: add inventory graph. The third graph shows nationwide inventory for existing homes. According to NAR, inventory declined in March by 1.6% to 3.745 million units. Other reports show inventory surged in March, so we will have to wait and see the numbers for April.

1) March is the beginning of the spring selling season.

2) Inventory is at a record levels for March.

3) Existing home sales are reported at the close of escrow. This means these contracts were mostly signed in January and February. So these numbers are mostly prior to the subprime implosion of mid-February.
Posted by Calculated Risk on 4/24/2007 10:11:00 AM
Newer Post Older Post Home