First, here are some quotes from the Reuters article:

A possible hard landing for the U.S. housing market poses the risk of a secular bear market for equities, mutual fund manager David Tice said on Monday at the Reuters Investment Outlook 2006 Summit.

"The rollover in real estate could happen pretty quickly," said Tice, who runs the the Prudent Bear, a mutual fund which seeks to benefit from falling share prices.

The United States has leaned heavily on housing and related industries for economic growth in recent years.

That virtuous circle, fueled by rounds of cash-out mortgage refinancing that has propped up consumer spending, will give way in 2006 or 2007 to a vicious cycle that drags down corporate earnings and employment, he said.
...
"The excesses in mortgage finance are just astounding," he said at the summit, which is being held in New York this week.
...
Years of cheap credit provided by an accommodative Federal Reserve has made more difficult the task of running a bear fund and picking the right stocks to short, Tice said.
...
Tice said credit market debt as a percent of U.S. gross domestic product "has essentially gone parabolic," and policy-makers have seemed prepared to prevent recession at all costs.

"If you continue to goose the economy with more debt it's like keeping an eight-year-old on a sugar high," he said. 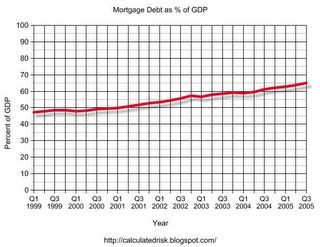 Tice is referring to all debt, but it might be helpful to look at the fastest growing segment; mortgage debt. This graph shows the growth of mortgage debt as a % of GDP since 1999.

Although mortgage debt has grown substantially, both nominally and as a % of GDP, I wouldn't call it "essentially ... parabolic".

I think the greater concern is the recent rise in household debt service and financial obligations ratios. Both ratios are already at record levels. 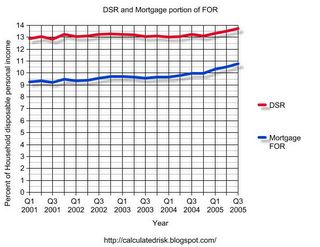 DEFINITIONS: The household debt service ratio (DSR) is an estimate of the ratio of debt payments to disposable personal income. Debt payments consist of the estimated required payments on outstanding mortgage and consumer debt.

Note: The graph only shows the mortgage portion of the FOR.

It appears households initially took on debt and kept their payments steady as interest rates dropped. However, recently the portion of disposable personal income dedicated to debt service has risen steadily. As interest rates rise, and with the new credit card minimum payments, the DSR and FOR will probably continue to rise, putting more pressure on household finances.
Posted by Calculated Risk on 12/12/2005 05:00:00 PM
Newer Post Older Post Home