Note: The Cleveland Fed released the median CPI details for May here. Motor fuel decreased at a 35% annualized rate in May. 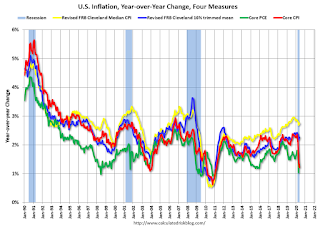 Inflation will not be a concern during the crisis.  Interesting, both the median CPI and trimmed-mean CPI actually increased in May.
Posted by Calculated Risk on 6/10/2020 11:15:00 AM
Newer Post Older Post Home