Led by declines in production- and employment-related indicators, the Chicago Fed National Activity Index (CFNAI) fell to –16.74 in April from –4.97 in March. All four broad categories of indicators used to construct the index made negative contributions in April, and all four categories decreased from March. The index’s three-month moving average, CFNAI-MA3, decreased to –7.22 in April from –1.69 in March. Following a period of economic expansion, an increasing likelihood of a recession has historically been associated with a CFNAI-MA3 value below –0.70.
emphasis added 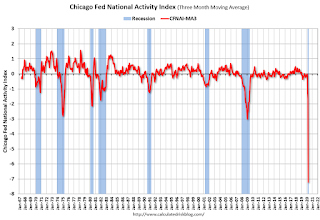 This suggests economic activity was in a recession starting in March (using the three-month average).