A few Comments on Weekly and Continued Unemployment Claims

We will probably see a decline in initial weekly unemployment claims this week. The consensus is initial claims will decrease to 4.145 million, from 5.245 million last week. That is still a huge number of initial claims.

The extremely high level of claims will probably continue for several weeks. But it will be important to track Continued Claims too - since many of these people won't be returning to work for some time. 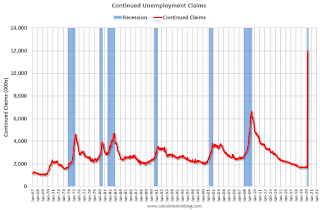 Here is a graph of continued claims since 1967.

Continued claims have already increased to a new record high of 11,976,000 (SA) and will increase further over the next few weeks.

During the Great Recession, initial weekly claims were a helpful measure of the recovery.   Although weekly claims will likely remain elevated for some time, they will decline significantly from the recent levels.