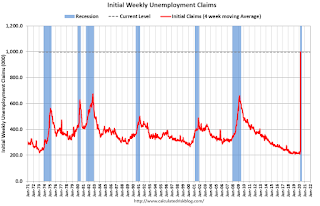 The dashed line on the graph is the current 4-week average. The four-week average of weekly unemployment claims increased to 998,250.

This was much higher than the consensus forecast.

This week initial claims skyrocketed, and next week continued claims will follow. 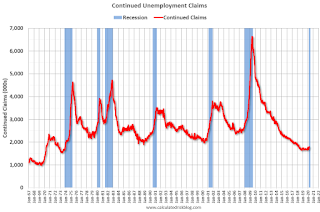 Over the next few weeks, continued claims will increase rapidly to a new record high, and then will likely stay at that high level until the crisis abates.
Posted by Calculated Risk on 3/26/2020 08:35:00 AM
Newer Post Older Post Home