Note: Claims for this week (reported next Thursday) will be extremely high. 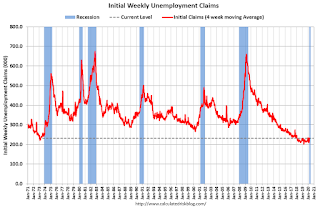 The dashed line on the graph is the current 4-week average. The four-week average of weekly unemployment claims increased to 232,250.

Note: Companies have just started announcing layoffs related to COVID-19. So we should expect weekly claims to increase to record levels next week.
Posted by Calculated Risk on 3/19/2020 08:35:00 AM
Newer Post Older Post Home